× This listing has expired.
Active

SOLD ! For Sale 7 Quarter Farmland in One BLock

RM of Hazelwood No 94 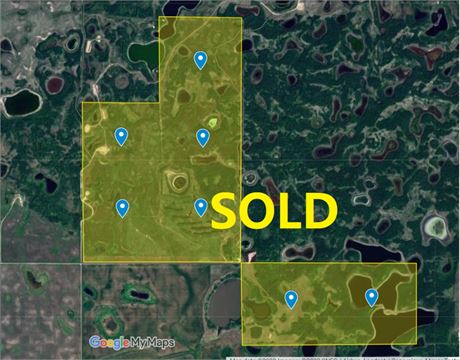 Rare Investment Opportunity. 7 quarters of mixed use farmland in one block, located close to Kipling and Moose Mountain Provincial park.

Land all seeded to tame hay with perimeter fences and some cross fences, land could be cultivated and turned into grain production.

There are 6 Oil surface leases that are included with the land. Seller has been paid for Surface Leases for 2022. Buyer to benefit from the surface leases for 2023 and beyond. Current lease will expire in this year, open for rancher use to use it for 2023 year. Current yearly revenue from oil leases is approximately 17,000/year. A couple of potential tenants for the farmland are available, potential rent for farmland is around $37,000 per year.  Also Potential income from 2 wind turbines. (contract has been signed, no turbines have been installed yet, seller is currently getting $500 per year from wind power company). Projected income from wind turbines is $33,000 per turbines (maximum 3 turbines could be installed, $11,000/turbine per year). Listing price of $999,000 is for farmland only. Asking price for the value on the oil leases is 7 times yearly revenue. Yard site with house, Sask Power and dugout. House has not been lived in for many years. House, yard and all buildings are included as is it is . Tax year on listing is 2021.

There are no questions for this listing.